Capt Jack Taylor, 91 year old retired Columbia River Pilot, has been a tireless and devoted volunteer at the Oregon Maritime Museum (OMM) since its founding in 1980. Early in the museum's development, Jack served as a trustee and later as Second Vice President. He was the museum's President from 1996 to 2000, when he returned to Trustee positions for another decade. He still visits OMM regularly, and rides along on most cruises of the Steamer PORTLAND, as our unofficial First Mate. Jack was instrumental in convincing the Port of Portland to donate the Steamer PORTLAND to OMM after it had retired in 1981 and was in very poor condition. He convinced the Port to sell the ship for a token amount of $1.00, and got their commitment of over $100,000 in financial support for restoration. He oversaw countless hours of the vessel's restoration. When the vessel was ready to return to operations, Jack was a regular volunteer Captain. During the flood of 1996, Capt Jack and one other volunteer crew member, safely steered the PORTLAND from the Portland waterfront as it was on the verge of overtaking the seawall during that flood.

Without Jack, the Steamer PORTLAND would not be docked on the downtown Willamette River. He led a group to the Oregon State house to change the Dept of State Lands (DSL) rulings on lease rates for the waterfront, and created an exception of DSL rules that gives a considerable discount to non-profit organizations who want to dock vessels on the waterfront. Jack has been a devoted donor to OMM, and both he and his wife Louise are life members. His donation of time exceeds 10,000 hours. He secured additional funding through his connections with the maritime community, supported grant writing for the Meyer Memorial Trust, and sustains relationships with Shaver Tug and other local maritime industries. Capt Jack Taylor is a remarkable and consistent presence who has played a major role in the founding and sustenance of a local cultural institution.

To learn more about the Oregon Maritime Museum, visit www.oregonmaritimemuseum.org 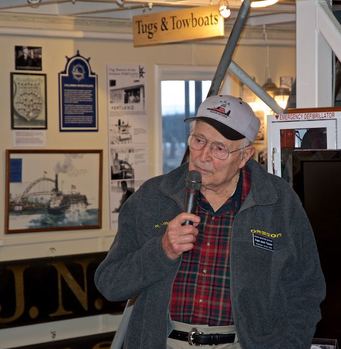